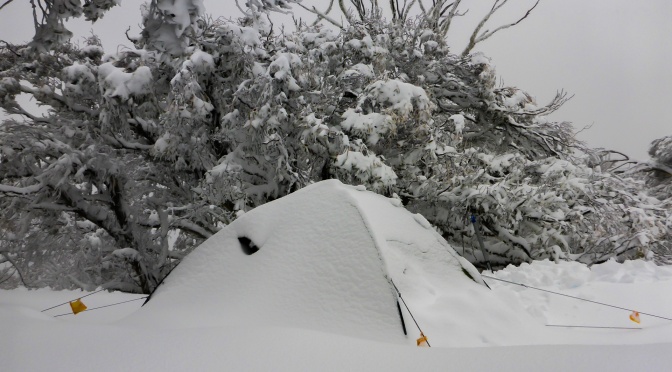 Only 1 week after my kids trip to Mt Stirling I was back at Stirling again with a group from Melbourne’s Hard Core Hikers. The weather forecast wasn’t ideal but I was keen to get onto the mountain and cover a few miles so I left Melbourne at 4am to get an early start on the trail. 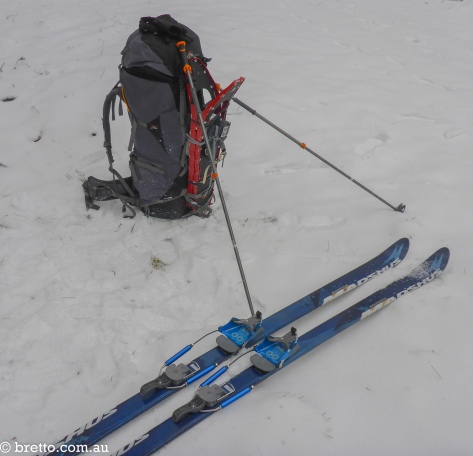 I had to walk for about 50 minutes from the car park at Telephone Box Junction to reach skiable snow. I wasn’t sure how steep Bluff Spur Trail would be and whether I would be able to ski down it so I took my snow shoes for the return journey just in case. It wasn’t very steep so I didn’t end up needing the snow shoes. Although unfortunately there was heaps of morons using the trails this weekend without skis or snowshoes and chewing up the track. 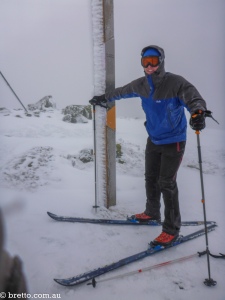 It was quite windy and unpleasant at the summit. The surface was very icy in places and I had to hold onto this sign post to prevent myself being blown backwards on the flat ice.

It wasn’t the original plan but we camped at Bluff Spur Hut along with another large group of people building an igloo and a handful of regular people who were probably annoyed there was so many people there. There was probably 30-40 people camped there on the Saturday night. I ended up doing a few laps around the summit, past the GGS Hut and back to camp which was quite a nice circuit. It would have been good to explore the area more but the wind was quite unfriendly above the treeline. 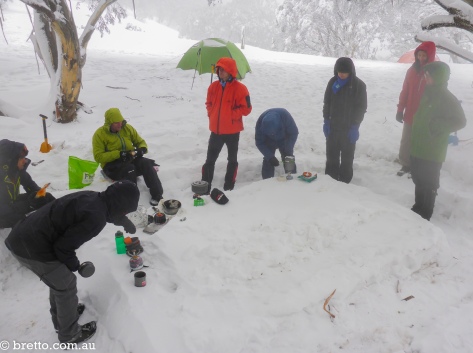 The Hard Core Hikers seemed to spend a lot of time drinking tea. These were the most Hard Core ones – the less Hard Core members of the group were sitting by the fire in the hut (where admittedly I found myself later having dinner). One of the members seemed pretty hard core as he was sleeping under a tarp. 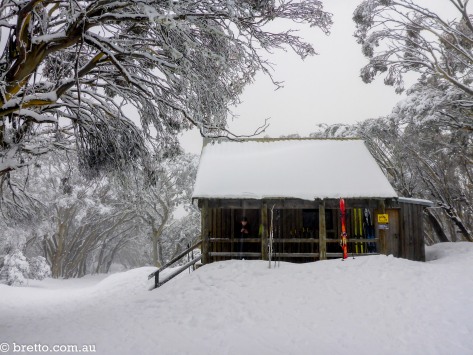 Bluff Spur Hut provided welcome shelter from the near constant snowfall. With about 20 people in damp clothes, the wood heater going and 15 stoves running it go so hot and steamy I thought people would start taking their pants off. Fortunately someone cracked the window to ease the sauna-like atmosphere before people started putting their keys in a bowl. 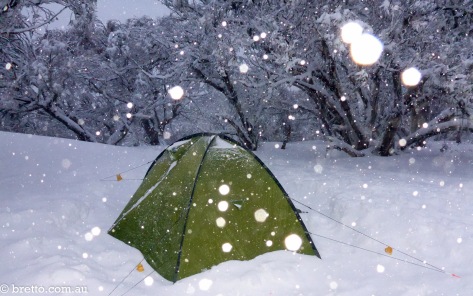 It snowed most of the day so I cleared the snow off the tent before I went to bed. 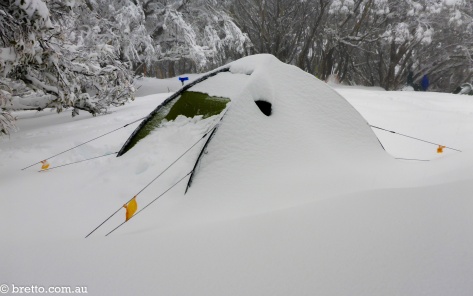 And in the morning it looked like this. Clearing the snow by kicking and whacking the walls of the tent during the night worked for a while but in the end the snow had nowhere to go. I reckon we received about 30cm of snow during the day and night. It turned to rain and sleet on the second day. 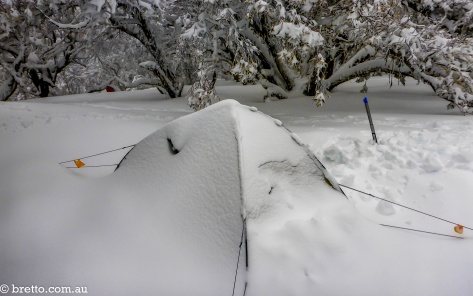 My trusty snow shovel got a good workout when it came time to pack up. 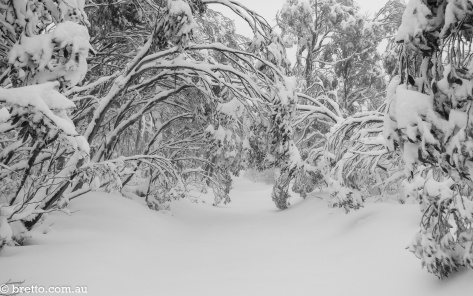 I thought I would take advantage of the fresh snow to ski down the untouched Bluff Spur Trail. The snow was sticky and slow (which suited me) but absolutely stunning as the snow-laden branches hung low over the track. 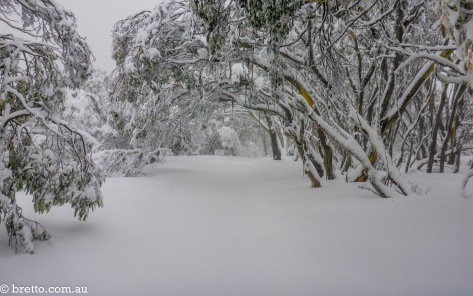 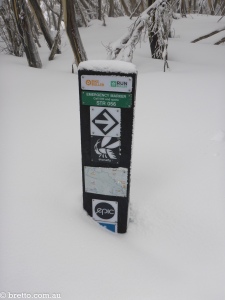 The mountain seems to be well signposted and if you have the Trail Map it is pretty easy to find your way around. 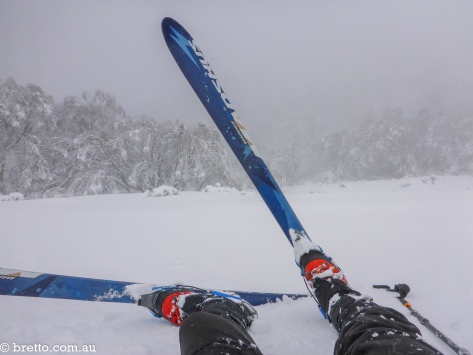 I practised my skiing for a while at Dugout Bowl. I am sure there are more graceful ways to stop than this. Unfortunately my skiing skills are even worse with a pack on.

It was not long after this I got smacked in the top of the head by a falling piece of ice/snow from an overhanging tree. It hurt a lot and I wished I had a helmet for trip back to the car. 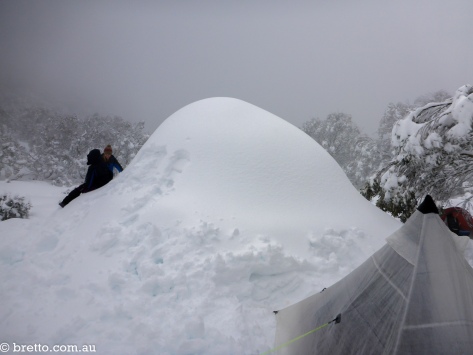 The igloo people managed to construct quite a large igloo from snow blocks formed in plastic tubs. It took about 15 people approximately 10 hours to make. I think they all slept in tents but had they slept in it that would have been pretty hard core.

It was a good weekend with interesting conditions. I got to explore a new area and meet some great people who are passionate about the outdoors. Thanks to the Hard Core Hikers for organising the trip.

I would like to get back to Mt Stirling and at 3 hours from Melbourne it is doable for a weekend trip. A damn shame it costs $70 for resort entry! See link for Entry fees