I knew this hike was going to be challenging – but we only had 2 days and I was keen to walk Helicopter Spur and Victoria’s iconic Crosscut Saw. Luckily my mates Ray and Adrian were silly enough to sign up for this mid-summer mission.

I left Melbourne after work on Friday night and met the other guys at the Bonnie Doon Hotel for a big feed to power us on our journey. Then we dropped off Ray’s car at the end of our walk (near King Hut) and then the 3 of us took my car to the start of our walk at the Upper Howqua Camping Area. We saw a few deer along the way and got to the camp about 11pm.

We camped beside the car at the Upper Howqua Camping area.  It was a warm night and there was thousands of bugs so rather than setup our 3 individual tents we shared this giant bug shelter. It is a pretty sweet campsite and we had the place to ourselves.

Good nutrition is an important element of a challenging hike so it was great to see Ray start the day with some cold wedges left over from his pub meal the night before.

We set off before 7am to beat the heat on the climb which was a wise move. None of us has been up Helicopter Spur before and it has a reputation as a tough, steep track. There were a few steep sections but nothing too scary – although coming down the spur with a heavy pack in the rain or snow would require balls of steel. 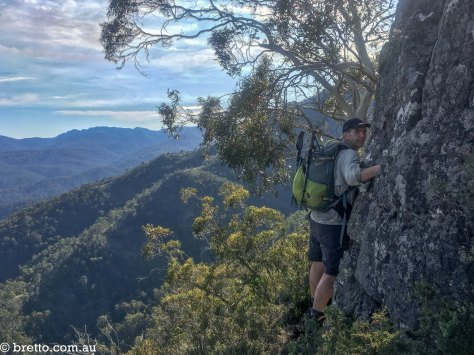 There was one section of Helicopter Spur where I nearly had to change my pants. I really don’t like heights and I felt so uncomfortable I tried to mate with the rock face. The annoying thing was that we didn’t even have to go around this ledge but our point man Adrian took a wrong turn and I blindly followed. So I had to return along this same dodgy ledge to get back on the trail. Needless to say Adrian was relieved of navigation duties for a while.

We saw many snakes and a couple of them were not moving out of the way for us. Normally you can just walk around at a safe distance, but Ray and I encountered a particularly stubborn one at the bottom of a rocky section we were climbing down. We literally had to jump over it. Luckily Ray had on his safety shorts.

The walk from the top of Helicopter Spur to Gantner’s Hut was great and we had fantastic views. I started the walk with 4 litres of water and that was only just enough to get me from the car to Macalister Springs. If the weather was cooler I could have got away with less. We checked the water points at Hellfire Creek and to the east of Mt Howitt (marked with a sign) and not surprisingly they were both dry as it was the middle of summer and there had been no rain for a while.

Macalister Springs might not look impressive but I can assure you the cool water was in high demand when we got there. I am not saying the water there is safe to drink – but we all drank it untreated and had no problems.The walk from the car to Macalister springs was nearly 19km (including a couple of short side trips) and took us just over 8.5 hours. By the time we got there at 3:30 pm it was hot and we were pretty stuffed. So we chilled in the shade for a couple of hours and drank a lot of water. This was a solid start to Day 1 but we had an ambitious route planned out and we had to keep moving.

Unfortunately Adrian wasn’t feeling great (perhaps because he didn’t have any cold wedges for breakfast) so he wasn’t keen to keep walking. So Ray and I did what anyone would do when their friend is unwell in a remote location…..we convinced ourselves he would probably feel better in the morning and we left him behind so we could continue with the walk as planned. 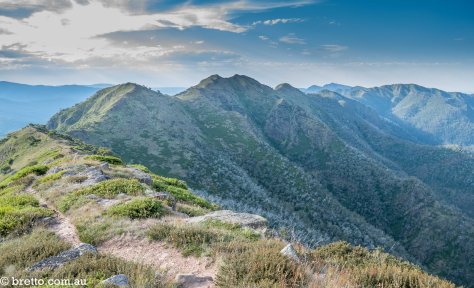 Ray and I set off again at 6pm when it had started to cool down a bit with the intention of making it to Mt Buggery for the night. As there is no water there I left Macalister Springs with 6 litres.

It was a great evening on the Crosscut Saw and the walking was mostly enjoyable. As it started to get dark we were getting pretty tired and a bit clumsy. After about 5km and 3 hours we made it to Mt Buggery just as it got completely dark. There was no one else around so we set up our gear and had a quick snack before getting some much needed rest. In order to keep weight down on this trip none of us took a stove so I had a Chief Bar for dinner (more on this later).

It was a warm and windy night but the Macpac Bush Cocoon provided heaps of ventilation and handled the strong gusts like a boss.

I was pleased to do the Crosscut Saw again as I hadn’t walked the whole thing since I was 16 on a school trip. As an adult I had tried to do it on 2 other occasions but for a number of reasons it didn’t work out.

We set off on Day 2 at 7am and I really enjoyed the climb up Mt Speculation. It was another clear day showing off the best of the Victorian High Country.

We originally planned to make the short (1km each way) detour to get some water at Camp Creek to the north of Mt Speculation. But after checking our water supply and the map we reasoned that it wasn’t very far to get back to Ray’s car and it was all downhill so no more water required – or so we thought.

We spoke to Adrian on the UHF radio and he advised that he was still alive, feeling better and now at Mt Howitt making his way back to my car (yes he had a key) at the start point via the Howqua Feeder Track (the route marked by the blue line on the map at the start of this post). It is also worth noting that you can get mobile service on many of the higher peaks in this area as it is quite close to Mt Buller.

You will see on the photo above that I went for long pants on Day 2 despite the heat. My legs were getting pretty scratched up from some of the overgrown sections of track.

It was an easy and pleasant walk to Mt Koonika where we stopped for a break before the final section of our trip. I only discovered Chief Bars a couple of weeks before the trip and although they are expensive they are a very convenient for hiking. The lamb is my favourite. You can check them out at eatlikeachief.com (no affiliation).

Our break at Mt Koonika took longer than expected as we pondered “surely that isn’t the way we have to go?” and “how the hell are we going to get down there?” The photo above doesn’t do it justice but even though the map marked this section as “steep” I wasn’t expecting this.

So we cautiously made our way down King Spur. The first 500 metres took us 1 hour!

Some of the rocky sections on King Spur were so steep we had to contour around the side of the spur and find another way down. I expect it would be much easier going up than down.

While we were struggling with King Spur, Adrian had made his way past all the snakes and down to the Howqua River where he was cooling off and drinking like a sailor (water, not rum that is).

King Spur flattened out for Ray and myself but we were finding the route hard to follow. We reached the knoll (1427m marked on the map above) and knew we had to find the track and the correct spur to reach the car or we would be in trouble. The car was only 3km away but it was really hot, we had very little water left and we were bashing our way through thick bush with only occasional hints of a trail. Going back was not an option I wanted to consider. We stopped a few times for some old school map and compass work combined with GPS coordinates from my watch and a bit of dodgy mapping on Rays phone (my excuses for being under-prepared: my phone had died the week before the trip so I was on a temporary unit with no good maps and I didn’t take my Garmin GPS to save weight and I didn’t get around to loading the route for Day 2 into my watch from Suunto Movescount). Fortunately I had put a waypoint in my watch at the finish point on Friday night when we dropped off Rays car. It wasn’t an ideal situation but we finally made our way onto the correct spur and found the trail. We plodded our way down the track that was steepish at times but pretty easy.

I expect that finding the track / correct spur would be much easier going up than coming down in this area. Or just be prepared with your GPS routes unlike us.

It was around now that Adrian called us on the UHF as he had driven my car from the start point to the end point. He advised that the water in the King River was super refreshing and the beers in the car fridge were icy cold. That was all the motivation we needed to smash out the last couple of kilometres (we had run out of water by this point and worked up quite a thirst).

After 8 hours walking (and only about 10.5km) we reached the cars where Adrian was waiting. We made the short drive to King Hut where we peeled off our filthy gear and cooled off in the beautiful clear water of the King River. Before long we were back in the cars and headed back to Melbourne.

While this was a great hike it would be more enjoyable over 3 or 4 days in Spring or Autumn.